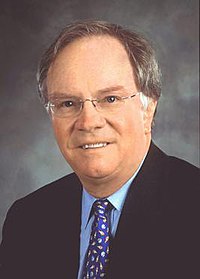 The Houston business community is in mourning this week over the sudden death this past Sunday of Matt Simmons, the 67-year-old investment banker, author and pundit whose views were a common topic on this blog over the years.

Matt founded Simmons & Company in Houston in the mid-1970’s with his brother L.E. as one of the first investment banks focusing on the increasingly important oil-field service sector of the oil and gas industry.

Simmons & Company eventually expanded into other areas of the energy industry and, by the late 1990’s, became one of the top energy mergers and acquisitions investment banks in the country.

Around 1983 or so, Matt’s firm and my law firm were on two of the floors near the top of the 700 Louisiana building in downtown Houston, so we developed a cordial friendship over the years by taking innumerable elevator rides together.

I’ve always been involved in a fair amount of oil and gas litigation, so Matt was always interested in that part of my practice.

And during the depression in the energy industry in Texas during the 1980’s, Matt was arguably the most insightful businessperson in Houston at the time on the direction of the industry and how it’s recovery should be structured.

Matt was a joy to talk with — witty, intelligent and interesting. That’s one of the reasons why, over the past decade or so, he became a media favorite for providing his provocative opinions about the energy industry.

Matt enjoyed his new role as one of the media’s energy industry pundits, but that wasn’t the best fit for the chairman of a company that was often advising companies that could be affected by his controversial opinions.

Matt retired from day-to-day management of his company in 2005 about the time his peak-oil treatise was published, but he continued on as executive chairman to help the company maintain client relationships. Matt and the company formally split ties earlier this year when he made his utterly unsurprising public comments in Fortune magazine about the probability of a British Petroleum bankruptcy.

Sadly, I didn’t see Matt again after the split, so I was never able to ask him about it. But my sense is that it was probably not that big a deal for him. He was working hard on his Ocean Energy Institute and I really think that is where his heart was as he segued into elder statesman status in the energy industry.

So, the local energy industry has lost a big part of its personality with the death of Matt Simmons. Many folks in the industry did not agree with some of Matt’s often controversial views, but that never stopped him from expressing those views and forcing energy businesspeople to think about the issues and formulate alternative viewpoints toward them. That is a resource that is vitally important to all industries, particularly one that is facing the current challenges of the U.S. energy industry.

Yes, Matt Simmons will be missed. Rest in peace, friend.