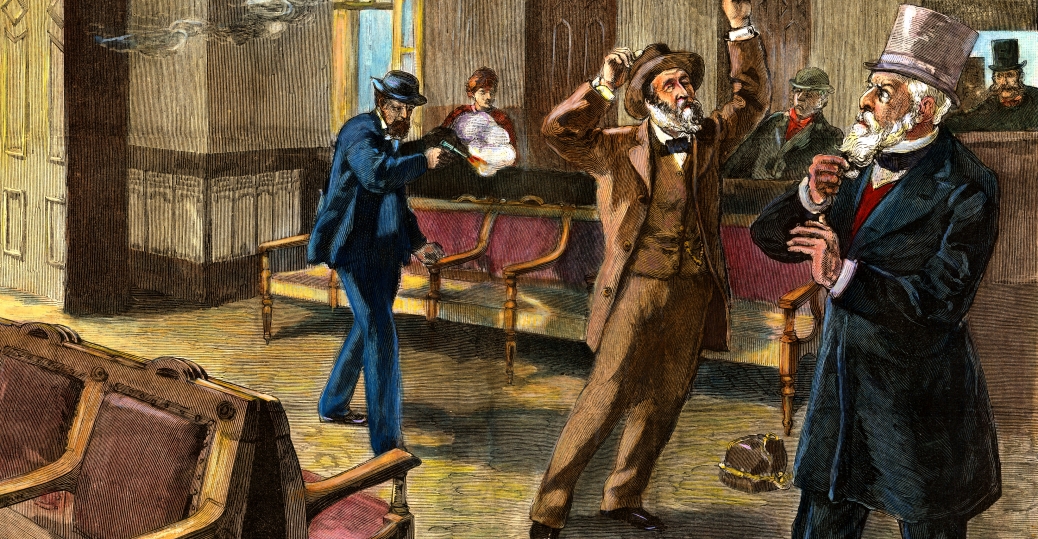 This NY Times article tells the fascinating story about the assassination of President James A Garfield in 1881 an exhibit commemorating the 125th anniversary of Garfield’s assassination at the National Museum of Health and Medicine at Walter Reed Army Medical Center.

President Garfield was shot in Washington by a disgruntled federal job-seeker, Charles J. Guiteau, who made his move while Garfield was waiting for a train. What is not as well-known is that neither of the shots that hit Garfield should have fatal even by the more primitive medical standards of the 1880’s.

As my late father once observed to me in a discussion of Presidential assassinations, “Garfield’s assassin just shot him. Garfield’s doctors killed him.”

The Times article reminds me of another interesting medical case that Dr. Donald J. DiPette, chair of the Department of Internal Medicine at Texas A&M University Medical School, presented earlier this year during the annual Walter M. Kirkendall Lecture that the University of Texas Medical School conducts in honor of my father.

Dr. DiPette’s lecture was about how advances in clinical research on hypertension had contributed to our understanding and knowledge of related chronic illness. He used a case study of a man in his mid-50’s in the late 1930’s who was showing signs of acute hypertension as an example of how that understanding can change the world.

The negative impact of hypertension on an individual’s health was not well-understood in the late 1930’s and 40’s. Dr. DiPette showed how the patient’s health in the case study deteriorated at an accelerated rate as his blood pressure readings increased markedly from 1937 to 1945. One evening in early 1940, the subject in the study fainted at the dinner table. The patient’s doctors at the time were unsure why.

By 1945, the patient — who was still working in an important and high-pressure job — had blood pressure that was off the charts and was experiencing a combination of associated medical problems that would have landed him in a hospital these days.

Nevertheless, the patient continued to work and, a couple of months after a particularly important work-related meeting, the patient died of a massive stroke.

Most times, the subjects of medical case studies are anonymous. But at the end of his lecture, Dr. DiPette revealed the name of the subject of this particular case study — President Franklin D. Roosevelt.

Dr. DiPette’s point was that President Roosevelt’s acute hypertension clearly affected his performance. Our lack of knowledge about hypertension in 1945 — which finally began to be better understood in the decade after FDR’s death — changed the course of the 20th century. That “important work-related meeting” that Dr. DiPette referred to was the Yalta Conference of early February 1945 that doomed Eastern Europe to over a generation of tyranny.

Remember that the next time you hear someone complain about the cost of advancing medical research.

2 thoughts on “Thinking about progress in health care”