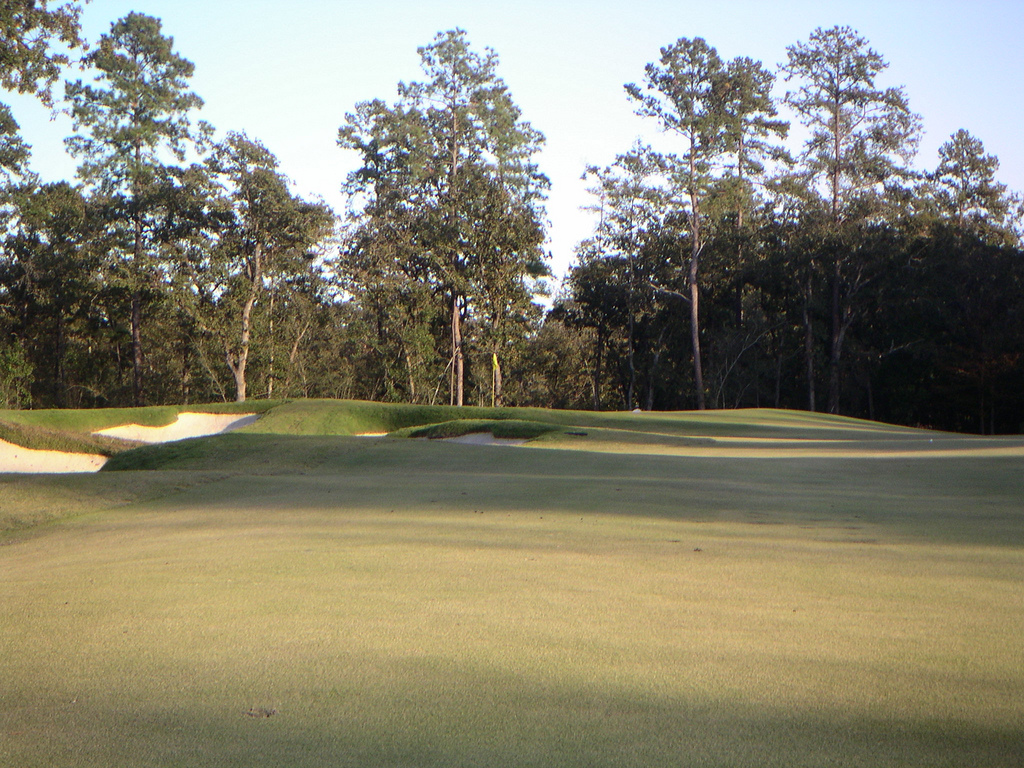 The day before the beginning of the Enron Task Force’s legacy case, you probably figured that you would find an Enron-related post here today. But before turning to the long slog of that trial, a beautiful late-January Texas day has my thoughts turning to golf.

This previous post reviewed the Golf Club of Houston that opened for play last summer and will host the Shell Houston Open Golf Tournament beginning later this year. However, the Tournament Course at Redstone was only one of two outstanding new courses that opened in the Houston area in 2005. The other one is the Fazio Course of the Club at Carlton Woods in The Woodlands and it is every bit as impressive a new entry on the Houston and Texas golf scenes as the Golf Club of Houston course.

Interestingly, at one time, the construction of the Fazio Course would have meant that the Golf Club of Houston course would have not been built at all. As noted in this previous post, the Houston Open had a tremendously successful, 26-year run at the old Tournament Players Course in The Woodlands as both the tournament and the community literally grew up together. Former Houston Golf Association (which operates the tournament) executive director Eric Fredricksen — who oversaw much of the Houston Open’s growth during his tenure — wanted the HGA and The Woodlands to build the Fazio Course as a new Tournament Players Course and move the tournament from old TPC to the Fazio Course.

Alas, Fredricksen resigned as HGA executive director before such a deal could be cut, new HGA management took over, the HGA and The Woodlands had a falling out and, before you know it, the HGA had divorced The Woodlands and moved its operations and the Shell Houston Open across the far north side of the Houston metro area to Golf Club of Houston.

Moreover, as with the Nicklaus Course, the Woodlands Corporation used the increasingly-popular sandcapping process on the fairways of the Fazio Course, which expedites the return of the course to playability after heavy rains. As a result of the sandcapping process, both the Nicklaus and Fazio Courses are playable within an hour or two of even heavy rains when most Houston golf courses would still be too mushy to play.

As with most new courses these days, the Fazio Course is long — almost 7360 yards from the championship tees and includes a 506 yard par 4 (no. 15) and a 623 yard par 5 (no. 4). However, this is not just a flogger’s course — three of the course’s 10 par 4’s are well under 400 yards, including the creative 307 yard par 4 seventh hole. Similarly, two of the course’s four par 3’s are well under 200 yards. Moreover, most of the greens on the course slope dramatically from back to front with subtle undulations that are made more vexing because of the sloping of the greens. Consequently, the Fazio Course actually places more emphasis on the short game than being able to hit the long ball.

Having played the course just once, it’s a bit difficult to predict what hole will ultimately become the Fazio Course’s signature hole, but my sense is that the 445 yard par 4 eighteenth (pictured above) will definitely be in contention. The fairway narrows into a ribbon the further you hit your drive, but laying too far back gives you a devilish long-iron shot into a thin, severely undulating green that is protected in front by water and the Fazio Course’s signature deep bunkers. Just hit it straight and long on this hole, and you will have no problem. ;^)

Criticisms of the Fazio Course are hard to come by. The course is a subdivision course, so — unlike the Golf Club of Houston — it will eventually have homes built on a good part of the course. As a result, it is not quite as walkable a course as the old TPC Course in The Woodlands. However, that’s the only negative that I could think of in regard to this extraordinary new addition to the top Houston-area golf courses. Here is slideshow of photos from the course.