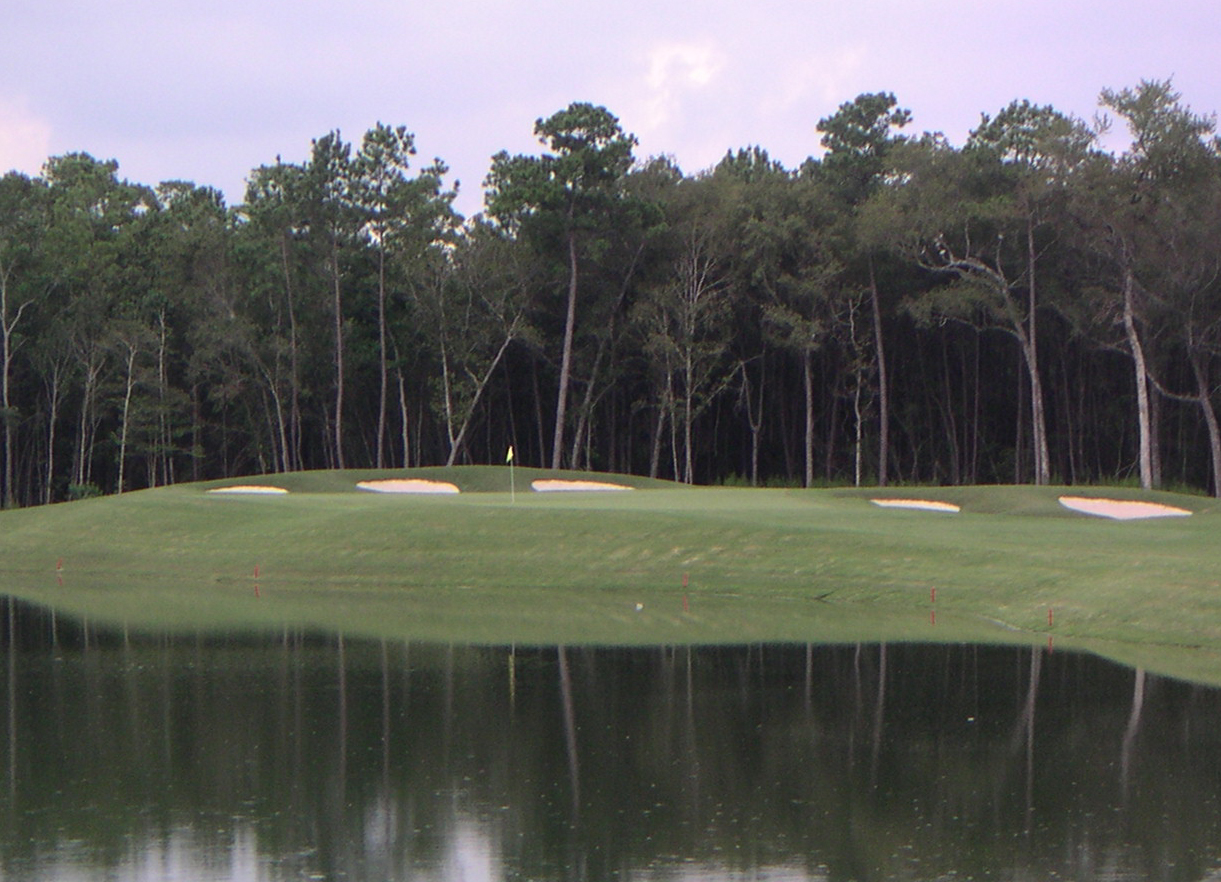 As noted in this previous post, the Rees Jones-designed Golf Club of Houston Course opened for play earlier this month to generally positive reviews. The Tournament Course — the new specially-designed home of the Shell Houston Open PGA Tour Golf Tournament — is the latest step in the Houston Golf Association‘s efforts to revive the lagging event, which relocated to Redstone three years ago after a spectacularly successful 28 year run in The Woodlands, primarily at the Tournament (formerly the TPC) Course.
Several days ago, three pals and I teed it up at the Tournament Course for the first time. Although we should have had our heads examined, we decided — in order to get the full flavor of the course — that we would walk the course with caddies (in 95 degree temperature with 90% humidity!) and play the course from the tournament (i.e., the longest) tees. Inasmuch as the ground was still quite wet from a heavy rain storm the previous afternoon, we received no roll on our drives and felt like we trudged every one of the 7,500 yards of the course. Despite the challenging conditions, we had a jolly good time, and the following is my report (with photographs) on the newest addition to the generally underrated family of Houston championship golf courses.

Overall, the Tournament Course is an outstanding addition to the Houston golf scene. It is already a very good golf course, and has a chance to become a truly superior one. At this point, I would give the course a strong B+, but my sense is that the Houston Golf Association — which did a wonderful job refining The TPC Course in The Woodlands over the years — will make the improvements and modifications necessary to elevate the Golf Club of Houston Course to one of the best golf courses in Houston and Texas. A strong golf course will not be enough alone to attract the best professional golfers back to the Shell Houston Open (a more favorable date help even more), but a strong course is a necessary component of a successful event, and the Tournament Course is certainly a good start to fulfiling that need.
Interestingly, despite its prodigious length, the Tournament Course is not simply a long course. It starts out with three relatively short, wide-open par 4’s before it begins to bear its teeth on a couple of par 4’s (holes five and six) midway through the front nine. In fact, four of the ten par 4’s on the course are under 400 yards, which is almost unheard in these days of increasingly long tracts.
The course requires a variety of shots, and the greens (Mini-Verdie grass, very good condition) are well-adapted for the particular holes — relatively flat and receptive for the longer holes, but quite undulating for the shorter ones. As with the TPC Course, the Tournament Course bears its teeth on its final two holes, the brutal 487 yard (uphill!) par 4 and the beautiful 485 yard par 4 18th that bends in and out of a lake that runs along the left side. Combine those two holes with the 200 yard par 3 sixteenth and you have a group of finishing holes that will take a back seat to few others in terms of difficulty. The course has a stout 138 slope rating from the tournament tees, and the 132 slope rating from the next set of tees up from the tournament tees is comparable to the tips at several very good Houston-area courses, such as Lochinvar Golf Club.
Despite the wet condition of the course when we played, the turf conditions on the Tournament Course are generally good with the exception of the 15th hole, where the fairway has simply not grown in well. The rough is already quite thick in most places and will be truly troublesome when the HGA allows it to grow for tournament conditions. Somewhat surprisingly, Redstone and the HGA elected not to use the sandcapping process on the fairways of the course, which has been been a big success at Carlton Woods Golf Club in expediting the return of the course to playability after heavy rains (a common occurrence in Houston generally and during Shell Houston Open week, in particular). The course is generally easy to walk, although there are long walks required between the green of the 1st hole and the 2nd tee, the 9th green (which is not near the clubhouse) and the 10th tee, and the green of the 17th hole and the 18th tee (where is a Metro light rail line when you really need one?). In my view, those long walks detract much from the otherwise attractive ambiance of the course.
The course is not as spectator-friendly as the TPC Course, but there are several wide open areas (particularly on holes 1, 17 and 18) and a huge practice area that will accomodate large numbers of spectators. The HGA will probably make gradual modifications to the course that will make it better for spectators than either Champions Cypress Creek (which has hosted several PGA Tour events) or the Jacobsen-Hardy Course that has hosted the Shell Houston Open for the past three years. As with Lochinvar and Whispering Pines Golf Club, the Tournament Course is a relatively rare Houston championship course that is not built into a subdivision, so the scenery on the course will not be disrupted over time with the development of home sites. Finally, Redstone is very proud of the course as their $135 green fee (including cart) reflects, but this is the type of course that one plays only on special occasions, so Redstone will probably have a steady stream of customers even at that relatively high price.
Driving the ball well from the tournament tees, this 8 handicapper shot an 85 on the Tournament Course, which is about as well as I could have played it. I’m looking forward to playing the course again when it’s a bit drier and not 90/90 in terms of temperature and humidity, and certainly not from the tournament tees. Nevertheless, I give the Tournament Course at Redstone a strong thumb’s up, so take the time to check it out in the near future. Here are some photos from my round.

7 thoughts on “Review of the Golf Club of Houston”