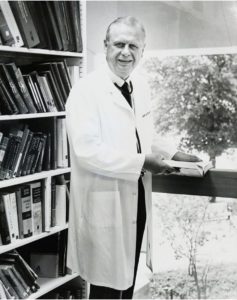 Inasmuch as I am one of ten children of the marriage of Walter M. and Margaret Kirkendall, I have a large number of family members (over 30 nieces and nephews at last count), many of whom are regular readers of this blog.

This particular blog post is primarily for those family members and our family friends, but even if you are not a member of those groups, feel free to read on and learn about a special father and a remarkable Houstonian.

The memory of where I was when my father died remains indelibly etched on my mind.

Shortly after 8:00 a.m. on Saturday morning, July 13, 1991, I was preparing to play golf in Iowa City, Iowa at Finkbine Golf Course during my 20th high school reunion. Unexpectedly, the pro shop summoned me from the first tee that I had a telephone call. When I reached the phone, my brother Matt was on the line with terrible news.

Our father, Walter M. Kirkendall had suffered a serious heart attack moments earlier in a Chicago-area hotel room while preparing to attend our cousin and his niece Sarah’s wedding with our mother.

At the time of the call, Matt did not know whether our father had survived the attack. Minutes later, after I had quickly returned to my hotel room to gather my things for a hurried trip to Chicago, Matt called again. Our father had died that morning in Chicago at the age of 74, probably before I had left the golf course in Iowa City.

Consequently, my memories of Walter Kirkendall’s death are inextricably intertwined with golf. To a large degree, that is utterly appropriate because, over the final 15 years of his life, Walter and I spent countless hours together golfing.

These regular golf games began in 1976 when I entered law school at the University of Houston. Back then, we would rise early most weekend and holiday mornings to play the back nine at the venerable Memorial Park Golf Course in Houston.

In 1982, we transferred those weekly games at Memorial to several Houston-area clubs, concluding at Lochinvar Golf Club. The final time I saw Walter alive was the Sunday morning before his death when we played golf together at Lochinvar. Inasmuch as he played quite well that day, one of my enduring memories of Walter is his chortling in the clubhouse as he collected his golf bets from me.

You see, despite his love of golf, Walter never became an active member of a private golf club. Walter gladly sacrificed something that would have been primarily for his enjoyment — that is, golf on a private course — for what he considered the more important needs of his large (ten children!) family.

Accordingly, as I joined several golf clubs over the final decade of Walter’s life, I made a point to give Walter an opportunity to play golf at those clubs as much as he wanted. His pure enjoyment of our golf outings is one of my life’s greatest satisfactions.

In addition to being a special father, Walter Kirkendall was a remarkable doctor and teacher.

As with many men of his generation, Walter finished his internship and residency at Iowa just in time to serve three years as an Army medical officer in North Africa and Italy during World War II, after which he returned to Iowa City to complete his training in medicine.

In 1949, Walter joined the University of Iowa Medical School Faculty and — along with esteemed colleagues such as Jack Eckstein, William Bean, Lew January, Frank Abboud and many others — proceeded to play a major role in the development of the University of Iowa’s fine medical school over the next 23 years.

Walter and his colleagues were at the forefront of the post-WWII doctors who embraced the optimistic view of therapeutic intervention in the practice of medicine, which was a fundamental change from the sense of therapeutic powerlessness that pre-WWII medical professors widely taught to medical students.

Several of Walter’s colleagues have told me that Walter’s attitude of therapeutic optimism was his greatest contribution to the education of his students.

Over his 40+ year academic career, Walter developed a program of teaching and research in hypertension and renal disease for which he received national and international recognition.

His first professional publications were on renal disease, but by the mid-1950’s, he was publishing papers on hypertension and the effects of drugs in patients. After 1960, almost all of his 85 abstracts and 72 papers involved research on the clinical pharmacology of hypertension.

In addition to his teaching, research, and service on multiple professional committees, Walter also directed the Cardiovascular Research Laboratories at the University of Iowa from 1958-70 and the Renal-Hypertension Division from 1970-72. Iowa honored Walter for his contributions to the University by awarding him the Distinguished Achievement Award in 1986.

Perhaps most remarkably, however, is that Walter in 1972 — at the age of 55 when most other academics are settling into comfortable surroundings while preparing to retire — decided to uproot his large family and move to Houston where he became the first Chairman of the Department of Medicine at the then-new University of Texas Medical School in Houston’s famed Texas Medical Center.

In Houston, Walter continued his professional passions — teaching, research and clinical medicine — for the remainder of his life at UT-Houston. In addition to being the first Chairman of the Department of Medicine, Walter was director of UT-Houston’s Hypertension Unit from 1976 and director of the General Medicine Division from 1982 until his death.

During his 20 years at UT-Houston, Walter became the patriarch of UT-Houston’s faculty and student body, reflected by the UT-Houston alumni awarding him the first Benjy F. Brooks Medal in 1991 as the outstanding clinical faculty member, the school’s naming of it’s internal medicine library and suite in Walter’s honor, and the Walter M. Kirkendall Endowed Lecture Series that UT-Houston sponsors each year.

So, the foregoing outlines Walter’s remarkable professional legacy — two institutions served for over 20 years each while teaching and pursuing cutting edge research in a key area of medicine throughout his career. James T. Willerson, M.D., the current president and medical director of the Texas Heart Institute, observed the following in his eulogy at UT-Houston’s memorial service for Walter:

Dr. Frank Abboud called me two days ago, wanted to come join me yesterday, early in the morning to visit and talk about Dr. Kirkendall, and then go to his funeral with me. . . Dr. Abboud told me that people in Iowa at the Medical School had never felt that Dr. Kirkendall had left. He was still there.

What he had given, what he represented, what he continued to give was part of Iowa. Can you imagine having that impact on an institution, and people years after you’ve left? Dr. Kirkendall did. How many of us could claim the same thing, ever?

But the foregoing doesn’t adequately convey Walter’s truly endearing qualities. He was a devoted teacher to his medical students and residents, and was constantly interested in the development of their careers. Patients appreciated his thoroughness, fairness and profound concern for them and their families. Many conversations with Walter invariably turned to stories about his aversion to wastefulness, the clutter in his office, his sense of humor, his competitiveness, and his suspicion that the sodium ion is bad for one’s health.

I close with two of my favorite stories about Walter. One is recounted by Tom S. McHorse, M.D., former president of the Travis County, Texas (Austin) Medical Association. Dr. McHorse recalls vividly his experience with Walter in examining a patient while in medical school:

The setting is the University of Iowa Hospital staff service ward one February morning.

For physicians who graduated after 1980, ward is defined as a large room with eight to ten patient beds separated by curtains, as many emergency rooms currently have.

As medicine was practiced in 1968, acute MIs, bacterial endocarditis, and other illnesses were treated in hospital for six weeks or more. The patient in bed four was such an extended stay patient.Dr. Kirkendall was rounding with his entourage of residents and nurses.

As we approached this frequently examined patient, a distinct change was obvious from the day before. The patient truly had the worst “soup bowl” haircut you can imagine. At bedside, Dr. Kirkendall addressed his first question to the patient:

“Who cut your hair?”

Dr. Kirkendall was clearly not pleased as he turned to his residents and declared:

“Incompetence at any level should not be tolerated.”

I have no memory of the patient’s diagnosis or anything else Dr. Kirkendall taught us that week, but I have long remembered that statement of Dr. Kirkendall.

The second story was passed along by Dr. Smythe in his eulogy during UT-Houston’s memorial service for Walter, in which he recounted a particularly personal experience with Walter:

Now, at this time, I want to skip ahead to something very personal.

1975-76 was also not a bed of roses at this institution. And, when I was bounced out of the Dean’s Office, I was profoundly hurt, very profoundly hurt, and, I was also puzzled. Since those who were relatively active in my demise had been the people to whom I was closest, I was also alone and considerably puzzled as to whom to turn.

Now, Dr. Kirkendall himself was under no mean pressure at that same time. And indeed, the forces that were playing on us were pretty much identical.

And, he did. And that episode illustrated this man’s extraordinary generosity of spirit more than anything that I’ve ever seen. I will be grateful to him for the rest of my life.

Walter’s understanding of the importance of service to others is the thread that binds the fabric of families, friendships, schools, professions, communities, and, ultimately, societies.

In his quiet and confident manner, Walter understood the importance of his life’s work, and this understanding formed the cornerstone of his unshakable sense of fulfillment and contentment in his personal and professional life.

In my book, that’s quite a fine legacy, and I am taking this Father’s Day to appreciate my blessing to have been touched by it.

12 thoughts on “Remembering a Special Father”