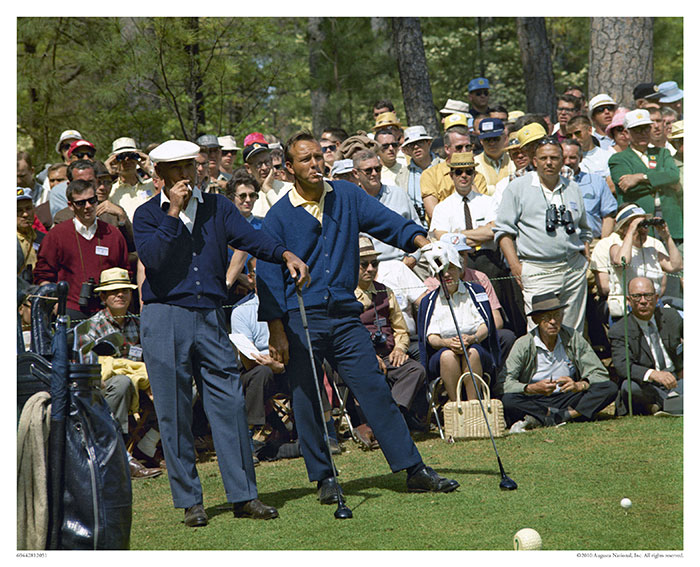 Arnold Palmer, one of the iconic figures of our time, died on Sunday at the age of 87.

Palmer’s story is truly remarkable. Charismatic and dashing, Arnie burst on to the national scene in the mid-1950’s just as the age of television was taking hold of American society. Through his lifelong business partnership with the late Mark McCormick of IMG fame, Palmer was instrumental in transforming how professional sports were presented, financed, and viewed throughout the world.

Incredibly, by the time of his death, this humble son of a western Pennsylvania greenskeeper had amassed a net worth of well over a billion dollars.

But what set Arnold Palmer apart from many icons was that he was a genuinely nice man to whom people naturally gravitated.

Ben Hogan, Byron Nelson and Sam Snead may have established professional golf in the United States from the late 1930’s through the mid-1950’s. But it was Palmer’s magnetism that made it popular with the masses during the 1960’s.

As a result, it seems as if everyone has a favorite Arnold Palmer story. Here is mine, but some background first.

One of Palmer’s numerous accomplishments was his leadership during the 1980’s in forming the PGA Tour for senior PGA Tour professionals, which is now called the Champions Tour.

Several years ago, Houston’s Champions Tour event — The Insperity Invitational — moved to The Woodlands Tournament Course, which is where the Houston Open PGA Tour stop was played for about 20 years before the Houston Golf Association moved the tournament to a bigger venue at the Golf Club of Houston.

In order to promote interest in The Woodlands event, Insperity and the Champions Tour asked Palmer to play in an exhibition with Jack Nicklaus and Gary Player at the initial Insperity Invitational. Of course, Palmer agreed to do so and continued to participate in the exhibition each year until he was physically unable to do so. The exhibition was a tremendous success and drew thousands of fans to the course for the tournament.

Which gets to my story.

A friend of mine named Dan who lives in The Woodlands used to pilot Palmer’s private jet for several years back in the 1980’s. Dan eventually moved on to pilot for Continental Airlines for many years, but he and Palmer remained good friends over the years from their many flying experiences together.

However, there is another interesting golf-related tidbit about Dan — he is a dead-ringer for Ben Crenshaw, the popular former University of Texas golfer and PGA Tour professional who still lives in Austin. Dan and I attend the same church and his resemblance with Crenshaw is so strong that I’ve actually had friends who do not know Dan ask me after church: “Hey, Tom. Was that Ben Crenshaw in church today?”

So, the first year that Arnie came to The Woodlands to play in the Insperity exhibition, Dan went over to The Woodlands Marriott Hotel on The Waterway to greet his old friend and reminisce about old times.

Arnie was happy to see his old friend, so Dan and Arnie plopped down in the lobby of the big hotel to talk. As was typical with Palmer whenever he was in a public place, a steady stream of fans interrupted to ask for his autograph, a photo, or both. Arnie accepted each request graciously and with a big smile.

But after Arnie had accommodated dozens of such requests, a nice-looking middle aged woman approached Dan, not Arnie.

Excuse me,” she said to Dan. “Could I ask you a question?”

Being gentlemen, both Dan and Arnie stood up while Dan addressed the nice lady.

“Why, of course,” replied Dan.

“I’ve just got to ask you,” said the lady nervously. “Are you Ben Crenshaw? He is my favorite golfer.”

Dan smiled at the nice lady. “No, I’m sorry. I’m not Ben Crenshaw. I just look like him.”

But then, with the prescience that comes only from being in the presence of someone such as the King, Dan put his arm around Arnie’s shoulder and exclaimed to the lady:

“But this is Arnold Palmer!”