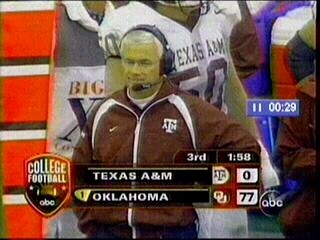 What is it about Texas A&M University that the institution cannot fire a football coach correctly?

The slowly disintegrating status of A&M head football coach Dennis Franchione has been a frequent topic on this blog for almost two years now. Although yesterday’s development in the saga was bizarre — A&M Athletic Director Bill Byrne holding a press conference to announce in the middle of the football season essentially that Coach Fran is kaput as A&M’s head coach after this season — it was not particularly unusual in view of A&M’s rather dubious tradition in dealing with its football coaches.

Take what happened in 1978, for example.

A&M head coach Emory Bellard, the originator of the Wishbone offense while serving as Darrell Royal’s offensive coordinator at Texas in the late 1960’s, had been hired by A&M in 1972 to resurrect the floundering Aggie football program.

By the 1978 season, Bellard had led the Aggies to three straight bowl games and the Aggies seemed poised to become a national power that season.

By week five of the 1978 season, Bellard’s Aggies were rolling at 4-0 and were rated no. 6 in the Associated Press Top 20 poll.

Bellard was reaching the pinnacle of his popularity at A&M as the Ags prepared to face Houston, which had not been particularly impressive and had lost in their first game of the season to a Memphis State team that the Ags had crushed at home 58-0 a couple of weeks earlier. Moreover, the week before, the Coogs had barely beaten winless Baylor, 20-18.

Thousands of Aggies descended on Houston’s Astrodome fully expecting the Aggies to continue their winning ways over the underdog Cougars.

Unfortunately for the Ags, Houston head coach Bill Yeoman, one of the brightest and most creative college football coaches of his time, had put together a brilliant game plan for this particular game.

Taking advantage of the Aggies unbridled over-aggressiveness, Yeoman devised a series of traps, draw plays and screen passes to supplement his famous Veer option attack that utterly befuddled the Aggies. In the meantime, an aroused Cougar defense stuffed the vaunted Aggie Wishbone and never allowed it to get untracked.

By halftime, the unranked Cougars led the no. 6 team in the country 33-0 and the large Aggie contingent in the Astrodome was absolutely stunned. Neither team scored in the 2nd half and the game ended, Houston 33 Texas A&M 0.

Back in those days, most head coaches supplemented their salaries by conducting a show the day after the game in which they went over the film highlights of the previous game. Bellard’s show the Sunday after the Houston upset was absolutely brutal.

Bellard addressed the camera by himself with no studio host to toss him some softball questions to defuse the anxiety of the humbling defeat. With literally no highlights of Aggie plays from the debacle, Coach Bellard was left to reviewing various Houston highlights from the game and explaining what the Aggie players did wrong in allowing the Cougar players to perform such feats. Coach Bellard looked haggard and utterly demoralized.

After watching the show with me, my late father turned to me and observed: “I hope Mrs. Bellard has removed all guns and sharp objects from their home for awhile.”

At any rate, the Ags dropped to no. 12 after the Houston game and began preparations for their next game against an 0-5 Baylor team that had played one of the toughest schedules in the country.

In arguably one of the worst games in the history of Kyle Field, that winless Baylor squad hammered the listless Aggies 24-6, as a previously unheralded freshman running back named Walter Abercrombie ran over and through the Aggies for 207 yards.

In the span of two weeks, what had been the no. 6 team in the land had been outscored 57-6.

Coach Bellard resigned the next day under intense pressure (one large sign hanging from an A&M dorm window at the time urged “Make Emory a Memory”).

In only two weeks, he had gone from being the King of Aggieland to quitting the job that he had always coveted.

To this day, Bellard’s demise and Texas A&M’s reaction to it over those two weeks is one of the more fascinating sociological events that I have witnessed during my 45 years in Texas.

So, placed in that context, yesterday’s developments regarding Coach Franchione are not all that unusual in Aggieland.

But what is interesting is that the Aggies (5-1/2-0) currently lead the Big 12 South Division as they travel to Lubbock this Saturday to meet their high-powered nemesis, Texas Tech (5-1/1-1).

Although the Red Raiders have beaten the Aggies regularly during Coach Fran’s tenure and are 8 point favorites to do so again on Saturday, my sense is that the Ags actually have a better chance than usual to beat Tech this time.

The Aggies have the type of ball control offense to keep Tech’s high-powered offense off the field and Tech’s defense is in such utter disarray that Coach Mike Leach recently fired his best defensive assistant coach. So, this might just be the year that Coach Fran’s Aggie team breaks through against Tech at Lubbock.

But will such a win save Coach Fran’s job?

Don’t count on it.

Even if the Ags upset Tech, they play at Nebraska next, then host a revived Kansas team before playing difficult games at Oklahoma and Missouri.

And, oh yeah, don’t forget about that traditional final game of the season the day after Thanksgiving against a Texas team that will be looking for revenge after last year’s A&M upset of the Horns that may have saved Franchione’s job for this season.

Heck, Gordon Smith even thinks that A&M may have a decent case for terminating Franchione’s contract for cause, which would relieve A&M from the requirement of “buying out” the contract if A&M were to terminate the contract “without cause” or, stated another way, for simply not winning enough football games.

That would be unusual because the Aggie way normally is to fire football coaches for not winning enough football games.

1 thought on “As the Aggie Football World Turns”