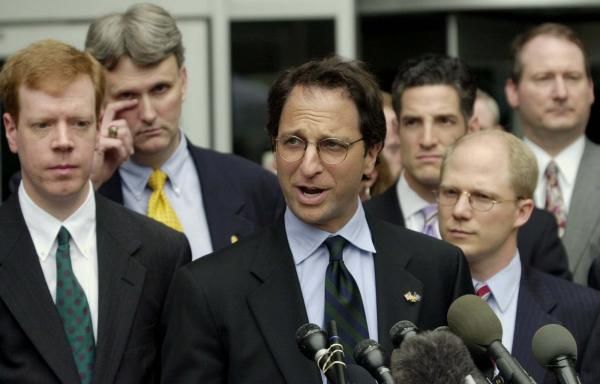 In a development that is intriguing by its timing, Andrew Weissmann is resigning as director of the Justice Department’s Enron Task Force, reportedly to enter private practice, although that report has not been confirmed. Another Task Force prosecutor — Sean Berkowitz — replaces Mr. Weissman as the director of the Task Force. Mary Flood’s Chronicle article on Mr. Weissman’s resignation is here.

Mr. Weissman joined the Task Force three years ago to lead the prosecution team in the Task Force’s controversial prosecution of Arthur Andersen, which led to the giant accounting firm’s demise and the loss of 30,000 jobs in the United States alone. He has been head of the Task Force since early March, 2004 when he replaced Leslie Caldwell, who resigned to enter private practice.

Since its inception in early 2002, the Enron Task Force has been particularly adept at generating propaganda demonizing Enron and bludgeoning former Enron executives into plea bargains. Such bludgeoning is most commonly carried out through the Task Force’s threat of seeking absurdly long prison sentences for former Enron executives if they elect to defend themselves in a highly-charged atmosphere against anything having to do with Enron that the Task Force has flamed to its advantage.

The timing of Mr. Weissman’s resignation is unusual because it was announced as jury deliberations are ongoing in the first trial involving primarily former Enron executives, the Enron Broadband trial. That trial has not gone well for the the Task Force and that unexpected turn of events has occurred against a backdrop of recent setbacks and several troubling incidents of apparent prosecutorial misconduct within the Task Force.

During the sentencing hearings, U.S. District Judge Ewing Werlein, Jr. firmly denied the Task Force’s dubious arguments for draconian sentences against the barge defendants based on the alleged market effect of the relatively small transaction involved in that case. Judge Werlein was clearly disturbed by the fact that the Task Force’s arguments on the market effect of the transaction contradicted the position that the Justice Department had taken before the U.S. Supreme Court well before the Nigerian Barge sentencing hearings in the case that the Supreme Court later decided in Dura Pharmaceuticals v. Broudo.

The second setback for the Task Force came in the Supreme Court’s stunning reversal in a unanimous decision of the Task Force’s conviction of Arthur Andersen, which brought into clear focus the dubious nature of both the Task Force’s decision to put Andersen out of business and the specious arguments that the Task Force used in criminalizing Andersen’s legitimate docket retention policy.

Next, during the Enron Broadband trial, a series of almost brazen examples of prosecutorial misconduct began to to unfold. First, the Task Force elicited false testimony from its key witness, former Enron Broadband co-CEO Ken Rice. Then, after that mistake, two witnesses (Beth Stier and Lawrence Ciscon) testified that, based on discussions with the Task Force before their testimony, they both felt threatened by a possible indictment if they testified on behalf of the Broadband defendants.

Finally, toward the close of the trial, U.S. District Judge Vanessa Gilmore sharply rebuked an Enron Task Force prosecutor for asking a question on cross-examination of Broadband defendant Kevin Howard that, if not in direct violation of a pre-trial order directing attorneys not to refer to certain subjects during the trial, at least violated the judge’s prior instructions to the Task Force prosecutors.

Without revealing the contents of the ex parte motion, Judge Lake ruled that he had concluded that the defendants had established a prima facie case of entitlement to subpoena under Fed. R. Crim. P. 17(c) all evidence relating to communications between the Enron Task Force and the 15 former Enron employees who have pled guilty under plea arrangements with the Enron Task Force.

Although the contents of the ex parte motion is a closely-guarded secret of the defense teams of Messrs. Lay, Skilling and Causey, speculation is rampant among Houston attorneys involved in the Enron case that the defendants had provided Judge Lake with compelling evidence that the Enron Task Force was threatening potential defense witnesses in the Lay-Skilling-Causey trial with criminal charges that could result in long prison sentences if the witnesses testified on behalf of the defendants. In a separate recent court filing, the Skilling defense team observed that “[t]he Task Force has taken control of the witnesses in this case to an unprecedented and impermissible degree. Witnesses will not meet or speak with us for fear of reprisal.”

Consequently, count me as tad skeptical of the “official” reason given for Mr. Weissman’s resignation during jury deliberations in the Broadband trial. In view of the foregoing setbacks and prosecutorial misconduct it would not be surprising if the Task Force’s superiors at the Department of Justice had simply decided that Mr. Weissman’s removal was advisable and that any further delay in naming a new director could adversely affect the Task Force’s preparations for its legacy case against Messrs. Lay, Skilling and Causey.

If that move results in a more judicious Task Force approach to the remaining Enron-related prosecutions, then perhaps at least a small part of the serious injustice that the Enron Task Force’s demonization of Enron has heaped on innocent businessmen and their families can still be corrected.

17 thoughts on “Weissman steps down as Enron Task Force chief”