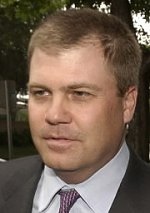 An interesting development occurred last Friday during the ongoing Enron Broadband trial, and the development is turning into the first genuine problem for the Enron Task Force prosecution based on Mary Flood’s report of today’s testimony.

Here’s what happened on Friday. Tony Canales, a former United States Attorney in Houston from 1977-80 who is a defense attorney for one of the Broadband defendants, was cross-examining the key prosecution witness and former Enron Broadband CEO, Ken Rice (pictured above).

Well, as you might expect, Mr. Rice is in full retreat today as Mr. Canales and other defense attorneys hammer him on why he previously testified that Mr. Shelby had made statements at the analysts’ conference that he actually did not make. According to Mary Flood’s Chronicle article, Mr. Rice appeared to be rather confused:

Rice said he’d seen the government’s video before testifying and when prosecutor Ben Campbell showed it to him in court Tuesday, Rice testified that he was surprised that Shelby was talking about the network operating system as up and running when it wasn’t.

“The government represented that the tape that included Shelby came from Enron and was played at the analysts conference,” Rice said.

In questioning from defense attorney Tony Canales, Rice said he knew Shelby had taped the segment in question and knew it was slated to be shown to the analysts.

Under questioning today, Rice said he thought about this a lot of over the weekend and even talked to his lawyer about whether he’d been shown the wrong tape and convinced himself he did see the Shelby segment at the analyst conference.

“He wasn’t any help to you then?” Canales asked Rice.

“All that money, no,” Rice said smiling back.

It was one of several light moments in the day when Rice acknowledged being somewhat overwhelmed by the circumstances.

Of note, Mr. Rice is testifying under a cooperation agreement in which he has pleaded guilty to one count of securities fraud in return for the prospect of a reduced sentence. However, the government’s support for that reduced sentence is conditioned upon Mr. Rice testifying truthfully during the Broadband trial. He is in his seventh day of questioning.

Even inside the courtroom — much less outside it — it’s notoriously difficult to evaluate how much any of this affects the jury. If the prosecution handles it correctly on re-direct, then the Enron Task Force prosecutors will take the blame for using the wrong video, apologize to the jury for their mistake, and simply have Mr. Rice re-confirm his opinion that certain of the statements made on both the raw footage video and the prosecution’s video were false. So long as the prosecutors take such an approach in a forthright manner, the jurors may view the prosecution’s use of the wrong video as an honest mistake and not think much about the erroneous part of Mr. Rice’s testimony.

On the other hand, if not handled well on re-direct, this is the type of mistake that could blow up in the prosecution’s face. Mr. Rice will almost certainly be called a liar by future witnesses for the defense during this trial, so his credibility will be a key issue for the jury.

The prosecution’s mistake in using the wrong video — and Mr. Rice’s failure to catch it — opens him up to the age-old defense tactic of arguing to the jury that “telling the truth is easy, but lying without making mistakes is hard.” In short, Mr. Rice was lying and the best evidence of it is that he was willing to lie about what statements were made at the analysts’ conference in return for the promise of government support of a shorter prison sentence.

So, watch this part of the trial closely. Three of the defendants in the Broadband trial have to overcome a huge elephant in the courtroom — i.e., the multi-millions that they made on selling Enron stock during an 18 month period. However, discrediting the government’s key witness is a nice start to deflating the prosecution’s case. Let’s see whether the prosecution can minimize the damage to their witness in the jurors’ eyes and move on to refocusing their case against the defendants on that elephant.

3 thoughts on “Checking in on the Enron Broadband trial”